We have launched this campaign to expose the tobacco industry. The tobacco industry is the problem. It sells a highly addictive, harmful product that kills half its regular users prematurely.  About 400,000 people die annually in the ASEAN region from tobacco related diseases. This industry then thwarts, delays, dilutes and defeats efforts to pass stringent measures to protect public health. To date, the tobacco industry has not admitted wrongdoing and continues to deny in the courts that its products cause disease and death.

We say:  “Time’s up Tobacco: Don’t be fooled by the tobacco industry”

This website exposes tobacco industry tactics in the ASEAN region and lays it bare for what it really is. It dispels myths created by the industry to mislead the public. It exposes the industry’s front groups and identify its supporters who speak on its behalf. We post our campaign and petition against the promotion of the tobacco industry. At the same time we also recognise leaders and government officials who stand up to the tobacco industry and reject its activities and expansion in the region – we award them. We want this website to be interactive, please join us in our campaign to de-normalise the Tobacco industry.

For more information: Time’s Up! 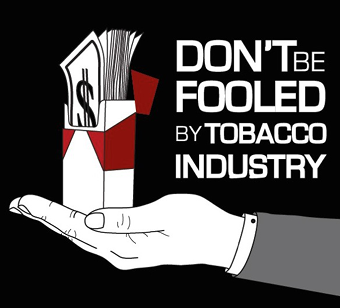