It is tax season in several ASEAN countries, including Indonesia, Malaysia and Vietnam, and governments are deciding their 2023 budget. The tobacco control community has proposed tax increase on tobacco as a win-win policy to reduce consumption and improve public health, and increase government revenue. But the tobacco industry continues to oppose tax increases alleging it will worsen smuggling – an argument it has routinely been repeating for many years.

Malaysia has not had a tax increase since 2015 but BAT Malaysia continues to claim that “The illegal cigarette market can be fueled by large increases in tobacco taxation, which often results in legal cigarettes being made unaffordable to some consumers who then switch to cheap alternative illegal brands.” Even without any tax increase, industry-funded data show smuggling continues to be high which clearly illustrates taxation is not related to tobacco smuggling.

Whether Malaysian policy makers will continue to listen to this industry scare tactic and subject the country to a seventh year of no tax increase is left to be seen this October when the 2023 budget is scheduled to be presented.

In Vietnam, the last tax increase was in 2019 and BAT-Vinataba JV is now delaying an increase saying, “[T]he government should not increase the excise tax in the next one or two years to avoid any turbulence in the market and the rise of illegal cigarettes.” Vietnam will not be able to meet its target of reducing smoking prevalence by 30% in 2025 without a substantial tax increase.

While WHO recommends a tax burden of 70% of the price of a 20-cigarette pack, Vietnam has among the lowest tax rates, 28 percent of the price of the most popular brand, compared to the excise tax burden in neighboring countries such Malaysia (47%) and Philippines (51%). On the other hand Pakistan, which has low tax and low prices (Table 1) has a huge illicit trade, described as “alarming” by Oxford Economics which is funded to do the study by Philip Morris International (PMI).

Only the tobacco industry gains when there is no tax increase because cigarettes remain affordable and the companies are free to increase cigarette prices according to their business plan to reap more profits.

Long coastlines have also been cited for high levels of smuggling. Australia, New Zealand and Norway have longer coastlines than Malaysia and Vietnam but have a stricter tax regime with regular tax increases and high cigarette prices (Table 1). These countries have low smuggling problem because of their good border control and enforcement measures.

Table 1: Price rankings by country of 20-stick pack of Marlboro in 106 countries* 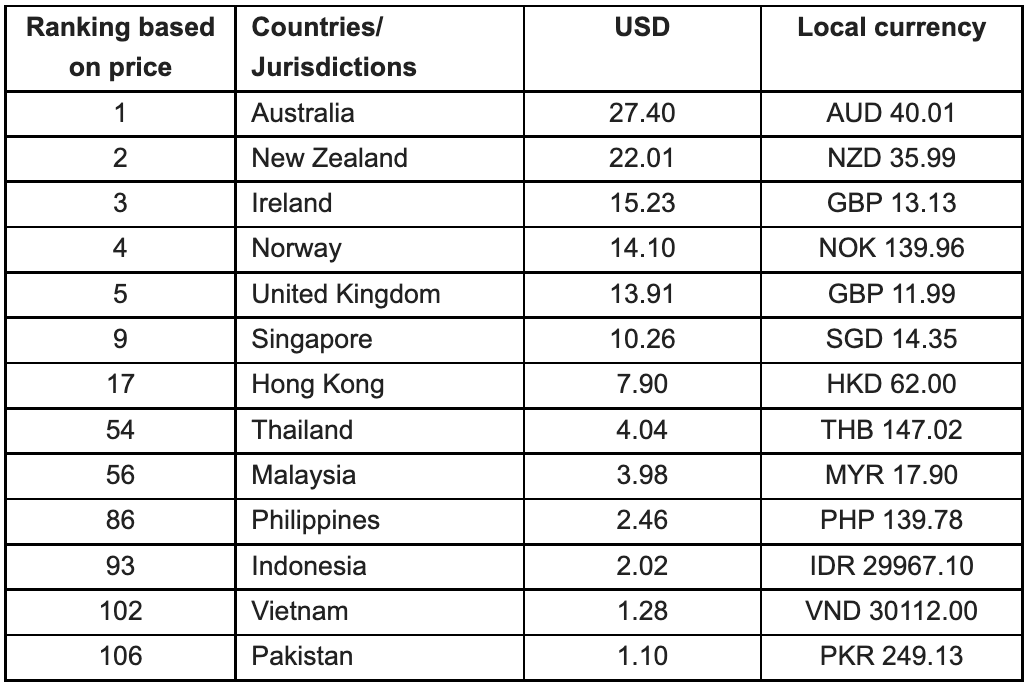 Smuggling is the all-purpose argument used to oppose any tobacco control measure by the tobacco industry and those who represent its interests. In Australia, a PMI-funded report by KPMG tried to pin illegal trade of cigarettes on the “most tightly regulated tobacco markets in the world.” Australia’s strong tobacco control measures has resulted in the country having among the lowest smoking prevalence (11%) in the world.

In Malaysia, the Federation of Sundry Goods Merchants Associations of Malaysia has opposed tobacco product display ban, plain packaging and ban on the sale of cigarettes and vaping products to those born after 2005 (end game policy) claiming “it could lead to a severe illicit cigarette trade”.

As Malaysia considers end game legislation, according to Green Zebras’ industry-funded study, the country’s illegal cigarette trade will “increase exponentially with the ban on the sale of cigarettes to those born after 2005.” While pro-industry groups tout the smuggling scare, they are silent on the smuggling problem in countries that have approved e-cigarettes such as the UK that faces a flood of smuggled vape products, including super-strong vapes, that target children.

Governments should not be scared-off by the industry’s smuggling arguments. Instead they should strengthen tobacco control measures, increase tobacco tax, step-up enforcement of border controls, without collaborating with the tobacco industry, ratify the Protocol to Eliminate Illicit Trade in Tobacco Products, and adopt end game policies that ban new tobacco and nicotine products.