Tobacco advertisements and promotions in the mass media is a practice of the past as this is prohibited in nearly all but 1 country in the ASEAN region. However, in reality, tobacco companies have merely changed the format in which this is now being done.

Tobacco advertising has now morphed into news articles, advertorials, opinion pieces, TV interviews and webinars which promote messages from the tobacco industry effectively promoting the corporations. Since tobacco companies don’t report or declare their marketing and promotional budget and sponsored programs, it is difficult to ascertain the extent of this problem.

Here are a few media trends observed in Malaysia:

On 2 December, LINC Astro Awani, an online events platform telecast a webinar on the ‘danger of smoke and reducing the harms of tobacco’ (Bahaya asap dan pengurangan kemudaratan tembakau). MyWatch Malaysia, a tobacco control NGO, posted on Instagram an exchange between them and an executive from the program who admits the webinar was sponsored by Philip Morris Malaysia. 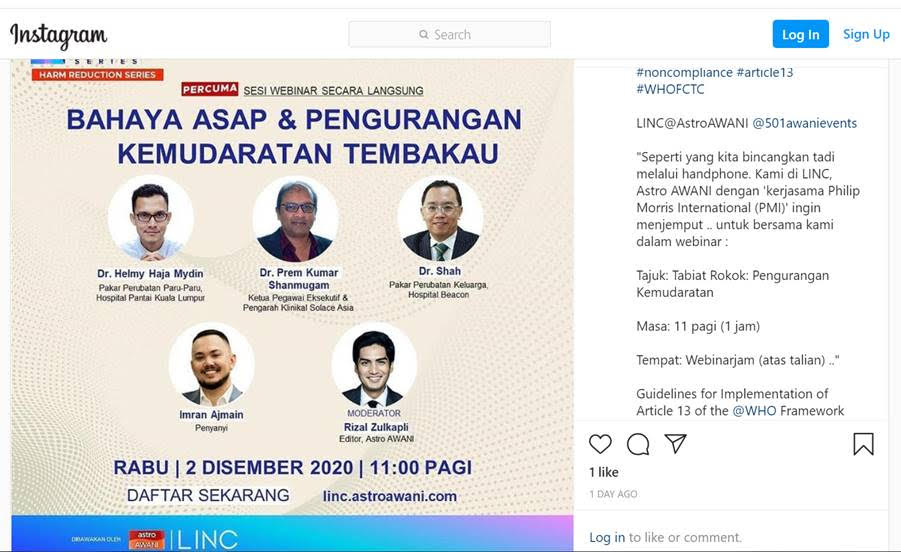 The promotional poster of the webinar had no disclosure that Philip Morris was the sponsor. One of the webinar speakers withdrew at the last minute because the producers could not give a straight answer to the simple question – is Philip Morris involved in this webinar?

The webinar theme is closely aligned to Philip Morris International (PMI)’s global UNSMOKE campaign rolled out in 2019 in many countries including Malaysia. Besides the Instagram post, there is no publicly available information on Awani’s collaboration with PMI or when it began.

In January 2020, Awani posted a pro-UNSMOKE message on its fb: GOING BEHIND ‘UNSMOKE YOUR WORLD’.  Awani has hosted three webinars in its “New Normal Series” but did not declare who the sponsor is.

While PMI’s UNSMOKE’s campaign claims smokers should quit however the company is not admitting liability and compensating those who were harmed by its cigarettes and continues to sell them. It is simultaneously selling heated tobacco products (IQOS) as a “better choice for adults” to switch to. According to WHO, tobacco use in any form is harmful.

Malaysia’s Control of Tobacco Products Regulation, (CTPR) defines tobacco advertising as purposes of promoting directly or indirectly the sale or disposal of tobacco product, and includes advertisement. It is in the hands of the authorities – the Ministry of Health and the Malaysian Communications and Multimedia Commission – to determine how the law has been broken and take action against the violators.

In Australia, according to the Australian Council on Smoking and Health (ACOSH), PMI’s UNSMOKE campaign are sponsored articles and hence are contravening the Tobacco Advertising Prohibition Act 1992 and that action should be taken.

Media can be used to undermine tobacco control

Several decades ago when the mass media was running tobacco advertisements, there was evidence that this influenced their editorial policy – latent censorship. But in the current environment of WHO FCTC implementation, the media publishing sponsored pro-tobacco industry messages can undermine government efforts to wean the population off tobacco.

An exposé by the Bureau of Investigative Journalism in February 2020 reported much of PMI’s UNSMOKE campaign is more spin than substance. The exposé revealed how PMI recruited social media influencers to promote its IQOS.

While PMI promotes its new products, its main profits are still from cigarette sales. In 2018, PMI sold about 740 billion cigarettes worldwide.

According to Article 13 of the WHO FCTC, a ban on tobacco advertising, promotions and sponsorship also includes indirect promotion, hence would cover the media’s collaboration with the tobacco industry. Article 5.3 calls on governments to require the tobacco industry to disclose its marketing and promotional budget.

The media must cease their collaboration with the tobacco industry.