Today is World No Tobacco Day (WNTD) and the tobacco industry, despite being responsible for the global smoking epidemic, has attempted to hijack this auspicious day. Philip Morris International (PMI) which sells 14% of the world’s cigarettes issued a statement saying today day should be called ‘World No Smoking Day’ instead. No, it does not intend to stop selling its cigarettes any time soon.

“But all we need to do is not listen to what you say, but what you do. You are selling MORE cigarettes while you talk about selling less”

Prof Chapman posted pic.twitter.com/UKSeTr93PG an image (Figure 1) of PMI’s cigarette sales in Indonesia which clearly shows it is selling more cigarettes, not less. Cigarettes are dirt cheap in Indonesia and even sold in single sticks by roadside vendors. 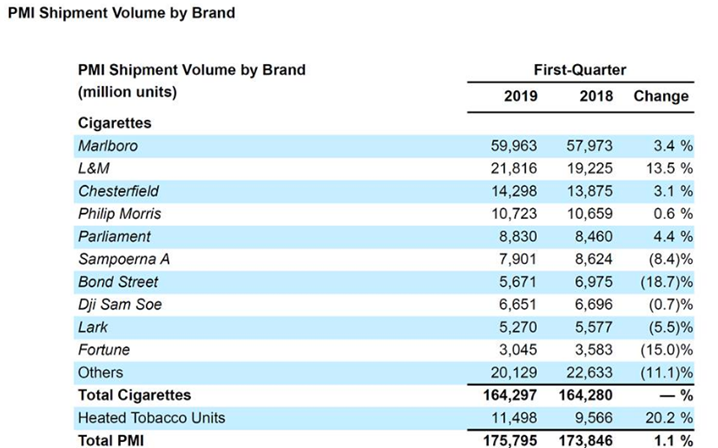 In 2018, the Indonesian tobacco industry and its representatives opposed tax increase vigorously. Just two weeks ago, PMI’s Indonesian subsidiary (PT Hanjaya Mandala Sampoerna) and the manufacturers’ association, Gappri, thanked the Indonesian government for not raising cigarette excise rates in 2019 – it was “a breath of fresh air for cigarette industry”. This means cigarettes remain accessible to children and the poor. PMI/ Sampoerna sell both the pricier premium brands, and cheap brands such as Dji Sam Soe which are availabe in kiddie packs.

While the transnational tobacco companies, PMI, BAT, JTI and Imperial Brands, beat their drums about concern for smoking and are offering so-called ‘new generation less harmful products’, however in the same breath they continue to push their regular cigarettes in low and middle income countries.

PMI has announced it has introduced its heated tobacco product (HTP) in Malaysia in March. The law requires these products to carry pictorial warnings, however that is not the case. Both BAT and JTI are planning to also sell their HTPs and perhaos also not follow the law if allowed to get away with it. HTPs and e-cigarettes are not sold in Brunei, Cambodia, Thailand and Singapore.

According to the latest news report in Indonesia, Sampoerna has signed a MOU with the Ministry of Research, Technology and Higher Education (Kemenristek Dikti) to conduct research on its heated tobacoc product (IQOS)’ development in the country.

Public health advocate, Dr. Widyastuti Soerojo, has expressed grave concern about this tie-up between a government department and a tobacco company, “This showcase of collaboration with a tobacco company has damaged the integrity of the Ministry and put Indonesia, a country still having a problem to control increasing youth smoking, in double burden situation. I strongly urge the Ministry of Research, Technology and Higher Education to withdraw the MOU with the tobacco company, a harmful industry.”

Alongside the tobacco industry’s rhetoric, its projection for the ASEAN region is to sell even more regular cigarettes in the coming years
(Table 1).

The WHO estimates every year more than 7 million people die from tobacco related diseases, that is about 1 death every 4 seconds.

Tobacco use in any form, smoked, chewed or vaped is still harmful. The 2006 WHO World No Tobacco Day’s theme was “Tobacco: Deadly in any form or disguise”. That fact remains true till today. And nicotine is addictive and is a poison.

This 2019 World No Tobacco Day is a reminder to keep the focus on tobacco, the need to protect our lungs and not to oxygenate the tobacco industry’s corporate strategy and new products.