In Indonesia, where tobacco advertising is still allowed, cigarette brands dominate 5 of the top 10 spots in the advertising sector. (Table 1) Although two out of three smokers will die prematurely, advertising (Ad) agencies design messages and images that make cigarettes attractive and appealing. 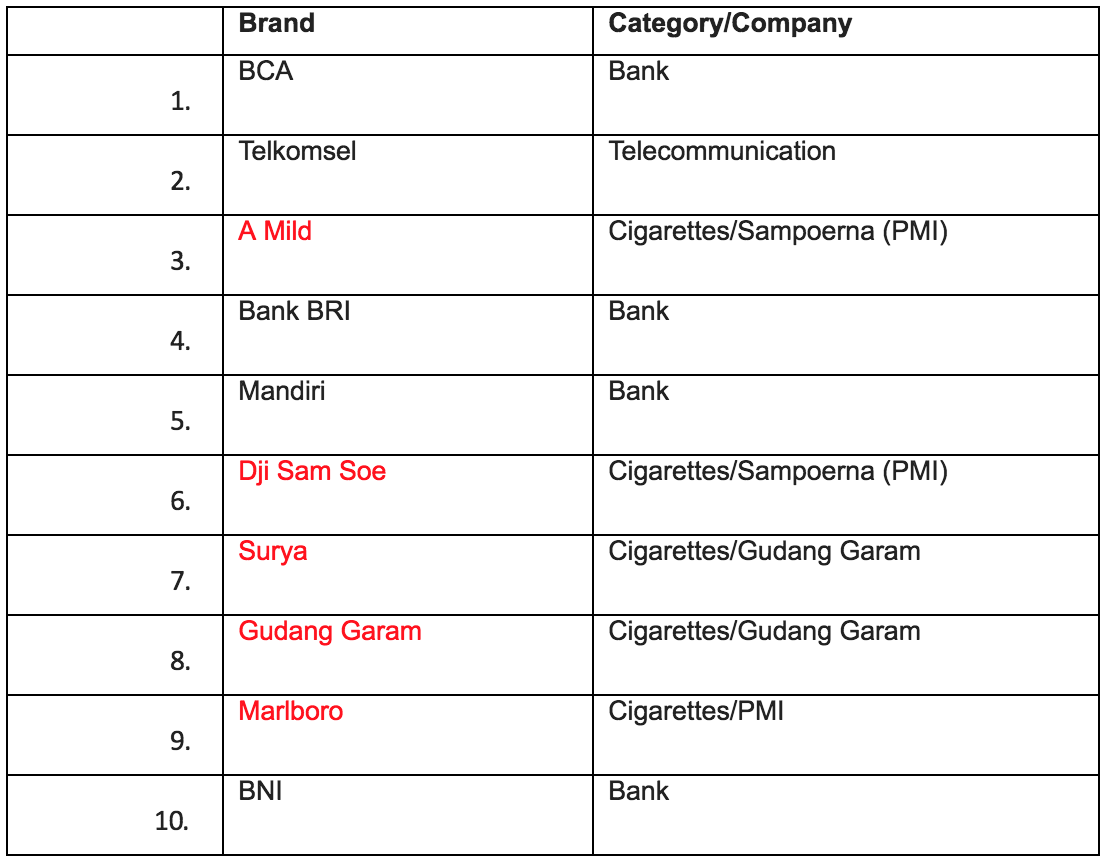 In Indonesia, Philip Morris International (PMI)’s brand, A Mild, uses music festivals and targets young people to be daring to do something different and follow their inner desires. Another PMI’s brand, Dji Sam Soe, use images of brotherhood, cultural traditions and demonstrations of pride in the country’s rich natural resources. These appealing messages reach the public through multi media –TV, posters and social media.

US Ad agency Leo Burnett created the ‘Be Marlboro’ campaign. In 2012, PMI spent US$62 million on its ‘Be Marlboro’ advertising. ‘Be Marlboro’ was launched in about 50 countries including Indonesia, Malaysia, Philippines and Thailand.

According to TobaccoTactics, Ogilvy & Mather has well documented history of working with the tobacco industry. BAT Malaysia is one of OgilvyAction‘s large clients and handled Pall Mall, Viceroy, Peter Stuyvesant and Rothmans brands.

Ad agencies and conflict of interest

While having tobacco accounts, a few ad agencies also had accounts for anti-smoking or anti-cancer campaigns. TobaccoTactics refers to this as “Bread buttered on both sides.” Ogilvy for example had simultaneously created anti-smoking campaigns in several countries.

An advert Ogilvy Asia created for the Thai Health Promotion Foundation in 2012 was called “brilliant in its simplicity” by theFinancial Times. The crux is in the use of “that perfect tool of manipulation: children” to deliver the message to smokers who – “as a rule – don’t like to be lectured”.

Leo Burnett had launched the ‘Be Marlboro’ ad in Colombia but it also created “Cancer Tweets” for the Colombia’s League against Cancer to raise awareness about the importance of addressing the signs our bodies give us.

Article 5.3 Guidelines covers not just tobacco companies, but also all those that represent its business, for example advertising and public relation agencies that create their ads and marketing strategies. It would be a conflict of interest to award anti-smoking campaigns to ad agencies that have tobacco accounts. Before awarding a contract to an ad agency for an anti-smoking campaign, check if the agency has or previously had a tobacco account.