Vietnam’s Tobacco Control Fund, set up to finance tobacco control programmes to reduce tobacco use, has come under attack from the Tobacco Association (VTA), which represents a business that kills half its customers prematurely, wants the money diverted to tackle smuggling instead. How predictable of the tobacco industry to attack tobacco control institutions and measures that are effective.

Vietnam has more than 15 million smokers consuming about 70 billion sticks in 2017. Tragically about 66,000 people die from tobacco related deaths every year. VTA is silent on the tobacco deaths because its goal is to increase number of smokers and stick sales, hence it is attacking the Tobacco Control Fund whose goal is to warn the public on the harms of tobacco and save lives.

All this distracting noise and attacks from VTA is because there is another important tobacco control measure being debated in Vietnam now – tax increase. To reduce smoking prevalence among young people and protect public health, Ministry of Finance has proposed two options of increasing excise tax on tobacco:

Option 1: Applying special consumption tax in mixed method (both proportional and absolute tax rates). In addition to the proportional tax rate, the authorities propose to add an absolute fee of VND1, 000 ($0.04) per pack of 20 cigarettes and VND10,000 ($0.43) per cigar. This regulation is recommended to be applied in 2020. 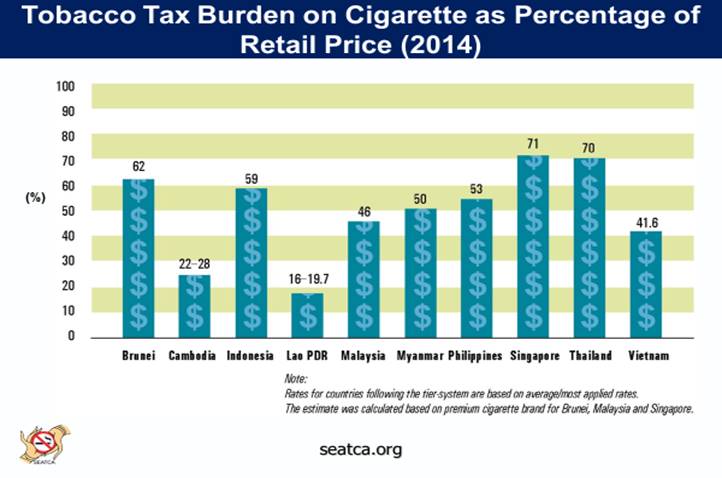 Tax increase and subsequent price increase is the most effective way to reduce tobacco use. But the tobacco industry is using the smuggling scare tactic as a convenient argument to attack tax increase.

According to a press report, Hanoi Steering Committee 389 has confiscated and destroyed 16,487 packs of smuggled cigarettes and 27,575 contraband cigars in 2018. However, the current legal documents which do not subject acts of trading, transporting and storing smuggled cigarettes to criminal prosecution, cause difficulties for functional forces in the fight cigarette smuggling. Clearly stringent anti-smuggling measures are need and play an important role to reduce these illegal acts.

This is not the first time that the VTA is opposing tobacco tax increase using the well-rehearsed smuggling argument. In 2014, VTA together with the state-owned VINATABA, using research sponsored by Philip Morris International, opposed consumption tax increase touting the same smuggling argument. This PMI sponsored research claimed Vietnam was the second largest consumer of smuggled cigarettes among 11 surveyed Asian nations. The research has since been debunked for its erroneous methodology and other myths.

Other countries in the ASEAN region attempting to increase tobacco tax such as Lao PDR, Malaysia and the Philippines also face similar opposition from the tobacco industry and its lobbyists. In Malaysia, IDEAS (Institute for Democracy and Economic Affairs) has been fielding research funded by PMI and JTI to oppose stringent tobacco control measures such as tax increase and plain packaging of tobacco.

Countries can draw valuable lessons from the experience of Singapore and Australia who have strong tobacco control measures including high tobacco tax but low instances of smuggling because of their good border controls and due diligence in tax administration. Tax increase must be regular and substantial for it be an effective tobacco control measure.