In an exposé, Van Der Eijk, Bialous and Glantz uncover how UN agency, UNICEF, entered into a partnership with the tobacco industry and became part of an overall tobacco industry strategy to improve its corporate image, infiltrate the United Nations, and weaken global tobacco-control efforts.

This new study, published in Pediatrics, explains how the tobacco industry engaged with UNICEF and children’s rights from 1997 to 2016 in an attempt to neutralize UNICEF’s anti-tobacco advocacy and infiltrate the UN to weaken the WHO Framework Convention on Tobacco Control (FCTC).

The study comes at an important time as debate around getting the ILO to sever its ties with the tobacco industry is still going on with a decision by its governing body pending in June  2018. The decision has been postponed several times already. The ILO can draw some lessons from this UNICEF exposé.

Early during the negotiations of the FCTC text, the WHO released a report ‘Tobacco and the Rights of the Child’ on how the rights enshrined in the Convention on the Rights of the Child apply to tobacco – protect children from smoking initiation, secondhand smoke exposure, tobacco marketing, and labour on tobacco farms. 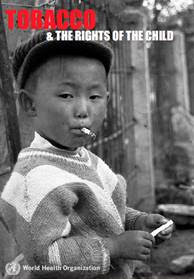 UNICEF is a natural ally for tobacco control. In 1999, WHO successfully enlisted the UNICEF in a joint international meeting on “Youth and Tobacco: What in the World Works?” held in Singapore. In 2001, UNICEF adopted guidelines that rejected all partnerships with tobacco companies or organizations affiliated with tobacco companies. However by 2003, UNICEF appeared to have shelved their guidelines.

This new study provides the information on what had happened. On the surface, tobacco companies promote themselves as champions of children’s rights, whereas in internal communications, the tobacco industry viewed any meaningful promotion of children’s rights as a threat to its business and UNICEF as a potentially powerful opponent that needed to be monitored closely andneutralized.

According to the authors, UNICEF guidelines were loosened in 2003 as part of an overall UN corporate engagement strategy, with potential partnerships to be assessed on the basis of the nature of the partnership rather than having a blanket prohibition of UNICEF working with certain business sectors, including tobacco.

A tobacco industry front group, ECLT (Eliminating Child Labour in Tobacco Growing Foundation) fully funded by Big Tobacco engaged with UNICEF on child labour between 2003 and 2016. Examples of ECLT–UNICEF collaboration unearthed by the study authors include the following:

In 2016, the UN Interagency Task Force (UNIATF) on Prevention and Control of NCDs adopted the draft model policy to prevent tobacco industry interference among UN agencies. This policy states: “UNIATF should reject partnerships, joint programs, non-binding or non-enforceable agreements and any other voluntary relationships with the tobacco industry.” UNICEF is a member of this Task Force but has been silent about this model policy.

The UNICEF has also not made public details about the extent of their collaboration with the tobacco industry, such as total grants, if any, and other relevant information on deliverables.

UNICEF and organizations working closely with UNICEF should end all partnerships with the tobacco industry or its front groups.