The Cape Town Declaration, adopted at the recent World Conference on Tobacco or Health, includes a component on Human Rights and a Tobacco-Free World. This is based on the main principle that “There is an irreconcilable conflict between the manufacture and marketing of tobacco products and the right to health.” The Conferenceadopted this separate, detailed sub-declaration on human rights, initiated by ASH USA. See detailed declaration here:www.ash.org/declaration.

The declaration states the concept of the right to a tobacco-free world as a component of human rights obligates States to address human rights implications over the whole life-cycle of tobacco growing, manufacturing, marketing, distribution, consumption and post consumption, including child labour, violations of workers’ rights and the rights of special populations as well as environmental destruction.

The Declaration refers to the United Nations Guiding Principles on Business and Human Rights and its respect, protect and remedy framework require the cessation of the manufacture and marketing of tobacco. The fundamentally harmful nature of the tobacco industry is such that it cannot be a partner in these efforts.

The recent experience with the Philip Morris International-funded Foundation for a Smoke-Free World is further evidence of the need to consider initiatives by the tobacco industry as public relations ploys to advance their corporate interests contrary to the human rights of the public.

The Declaration calls upon the Member States in the Human Rights Council to affirm the right to a tobacco-free world as a component of the right to health in a resolution or statement no later than 2021.

So far over 100 organisations from around the world have endorsed this declaration. You can support this initiative by adding your signature here.

In the ASEAN region, there are human rights lawyers engaged in tobacco control especially in Indonesia and the Philippines. In Indonesia, the Jakarta Residents Forum (FAKTA) for example champions the protection of people’s right to health and have gone to court on tobacco control issues. In the Philippines, HealthJustice represents a vehicle for Filipinos to be free from health risks that could be prevented through appropriate health policies. See here for HealthJustice’s Time’s Up Tobacco campaign.

The tobacco industry has challenged several governments by taking them to court over their tobacco control measures as shown in the figure below. Reference: Tobacco Control ATLAS ASEAN Region, 2016. Ref: http://bit.ly/2kT8Y5W Pg.31 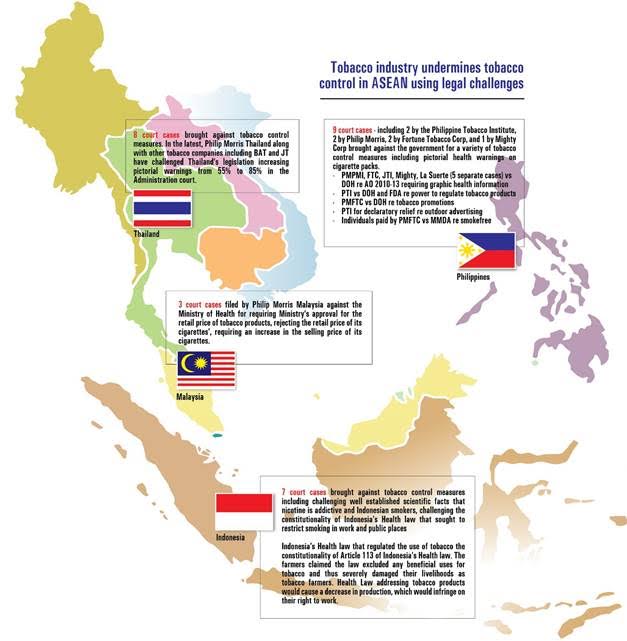