In recent times we have seen two high profile public health professionals from tobacco control join Philip Morris International (PMI) funded Foundation for Smoke-free World (FSFW). In September, there was much publicity when Dr. Derek Yach, previously with the World Health Organization, was appointed the President of FSFW.

In November, many tobacco control advocates were surprised to learn Dr. Ehsan Latif, the former Director of Tobacco Project under the International Union Against Tuberculosis and Lung Disease (The Union) had joined the FSFW as its new Program Director.

The FSFW is a US$80 million a year project (US$1 billion over 12 years) funded by PMI to promote harm reduction. While PMI claims to be promoting “a smoke-free world” it however continues to spend billions marketing and selling its regular cigarettes and fighting legislation to reduce tobacco use (see here).

Dr Latif, a vociferous tobacco control advocate, had a strong position that tobacco control policies must be protected from industry’s interference (FCTC Article 5.3) and that “We can never trust the tobacco industry” (see illustration). However, now that he has switched sides he may not hold that view anymore. 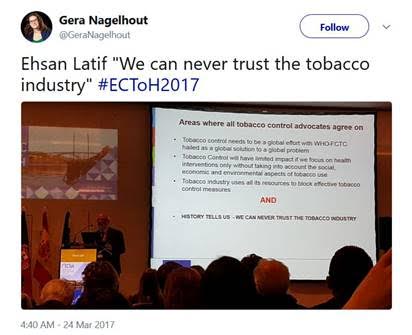 “Parties should develop clear policies that require public office holders who have or have had a role in setting and implementing public health policies with respect to tobacco control to inform their institutions about any intention to engage in an occupational activity within the tobacco industry, whether gainful or not, within a specified period of time after leaving service.”

Dr Latif worked with The Union for seven years, till 31 October 2017 and on the next day, 1 November, started work with FSFW. While government officials are expected to implement the Article 5.3 guidelines, it is also important for civil society to apply the same standards to avoid the strange situation.

“On 29 November, Dr Latif sent out an email blast to many tobacco control advocates addressing them, “Dear colleagues”, touting his new message that he is making an “announcement of two new initiatives”. He made no mention that these new initiatives are funded by PMI.”

The FSFW has indicated that it is an independent entity and that “PMI and the tobacco industry are precluded from having any influence over how the Foundation spends its funds or focuses its activities.” Past industry behaviour tells us the tobacco industry sets up independent foundations to give an air of “independence” and “separation” to circumvent tobacco control legislation. In Malaysia BAT set up a separate foundation to conduct its CSR activities while in Indonesia tobacco companies have foundations to fund sports, educational and cultural activities.

While the FSFW may be a different legal entity, it is using PMI’s money to lay the foundation to promote PMI’s heat-not-burn product – IQOS – and is accessing governments and the public health community to facilitate this.

On 20 October, the FCTC Convention Secretariat issued a Note Verbale that calls upon Parties to be aware of the recent initiatives of the tobacco industry which could damage tobacco control and jeopardise implementation of Article 5.3, such as:

Recent events have emphasised the importance of implementing Article 5.3 urgently. SEATCA’s 2017 Tobacco Industry Interference Index, released on 27 November, has found that Article 5.3 implementation is moving at snail’s pace in the ASEAN region. As the tobacco industry gets increasingly denormalised, it is finding ways to reframe and repackage its image.