Euromonitor International quotes a US robber to explain why Big Tobacco is expanding its business in developing countries: When asked why he robbed banks, robber Willie Sutton replied, “Because that’s where the money is.”* Referred to as the ‘Willie Sutton Rule’, it explains the obvious – large smoking populations in developing counties yield big profits for tobacco companies.

According to Euromonitor International, almost 90% of the value of the global cigarette market between 2011– 2016, was contributed by smoking population from developing countries. High smoking prevalence, tolerance of smoking, relative absence of organised advocacy for stringent regulation, relatively rapid economic growth and lower tax burdens give the tobacco industry opportunities for lucrative expansion.

In the ASEAN region, high male smoking prevalence continues to plague 8 countries as shown in the graph below. 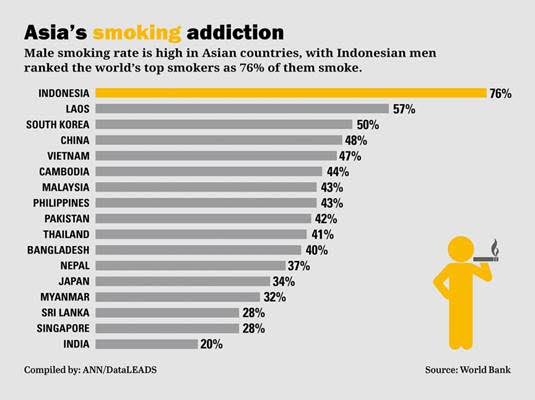 Indonesia has the world’s highest male smoking prevalence, 76%, and remains among the least regulated countries in tobacco control. The government and policy makers appear unmoved by the growing smoking epidemic among small children. More than 267,000 Indonesian children are estimated to smoke cigarettes every day. Big Tobacco controls about 45% of this cigarette market and enjoys a friendly legislative environment to expand its business.

In Lao PDR, Imperial Tobacco benefits from the high male smoking prevalence (57%), having locked the country into a 25-year business agreement which caps tax increase, paying only 15% excise tax on tobacco. The tobacco industry has also not complied with legislation which requires them to pay a health fee (200 Kip/pack or US$0.02 per pack) to the Tobacco Control fund.

Demography is another reason for the continuing primary importance of developing country markets to the tobacco industry. According to the Global Burden of Disease Study, between 1990 and 2015, global smoking prevalence fell from 29% to 15%. However, because of population growth, the actual number of smokers increased from 870 million to 933 million.

In the Philippines, tobacco tax reform which translated into cigarette price increases in 2013 resulted in about 1 million smokers quitting. However, male smoking prevalence remains high demonstrating that the tax increase was not high enough. With the recent acquisition of Mighty Corp. by Japan Tobacco International (JTI), now just two companies (PMI and JTI) control more than 98% of cigarette market – selling cigarettes to about 16.6 million Filipino smokers.

BAT, World No.1 transnational tobacco company now, has large portions of cigarette market share in Malaysia (62%), Cambodia (40%) and Vietnam (30%) – all three countries are languishing in male smoking prevalence which remains above 40%.

Big Tobacco is salivating over its opportunities in Myanmar. Euromonitor International describes Myanmar as a country that “epitomises the modern day emerging opportunity” having “limited regulation and positive economic prospects to seal the deal”. In 2010, cigarette sales in Myanmar were about 13 billion sticks. However the sales projection in 2018 is set to double to 25 billion sticks. Myanmar’s projection on cigarette sales is the highest increase compared to all other ASEAN countries. The most popular pack of cigarettes cost only US$0.57.

In many countries, non-health departments cannot recognise the tobacco industry applying the robber ‘Willie Sutton Rule’. They invite the robber in, collaborate with the robber and provide incentives to make it easier for the country to be robbed. Unfortunately this robber doesn’t just rob the populations’ health and wealth, but leaves behind a trail of deaths – 500,000 in the ASEAN region.