Indonesia has the world’s second largest number of smokers, after China. Two out of every three men in Indonesia smoke and child-smokers number over 20 million. Meanwhile tobacco control measures are lagging very far behind other countries in the region.

Smokers from poor countries are important to JT’s profit growth. In 2016, more than 30% of JT’s total overseas sales – 137.9 billion sticks – came from developing countries. In the past two years, JT has acquired tobacco companies in developing countries – Brazil, the Dominican Republic, and bought 40% stake in Ethiopia’s National Tobacco Enterprise. Recently it confirmed taking over assets of Mighty Corp of the Philippines.

Prior to the purchase of KDM, JT had a tiny market share of 0.1% in Indonesia. Now it has jumped to 2.3% and this will increase with JT’s aggressive marketing tactics (see figure below). 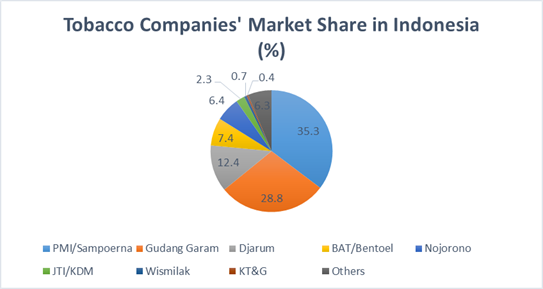 JTI’s President labels the ASEAN region as a “thriving region” for the cigarette business and sees the Indonesian acquisition as “an important expansion of our geographic footprint in emerging markets for our future sustainable growth.”

Since the Japanese government owns 33% of JT, it is contradictory for the government to be an active part of increasing tobacco sales when it has an international obligation to reduce tobacco use. Like Indonesia, Japan also has weak tobacco control measures, however its smoking prevalence is lower than Indonesia.

Poor smokers in Indonesia fill the profit chest of the TTCs and that is why they are increasing their business in Indonesia. With this acquisition, TTCs will now collectively control 45% of the cigarette market. (See figure below). 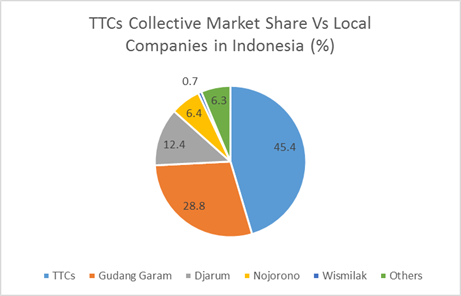 The TTCs’ front group in Indonesia, GAPRINDO (Association of Indonesia White Cigarette Manufacturers), champions their interest. GAPRINDO has been actively opposing and protesting against tax increase and any tobacco regulation. It makes misleading claims how tobacco control will destroy the industry, playing on the public and the government’s sentiments.

The government must pay attention to how the tobacco industry is exploiting the lax regulatory environment to increase number of smokers and cigarette sales. This will result in more deaths and more sick Indonesians. The quicker the government acts to implement strong tobacco control measures, the better for the people.