This takeover of Mighty Corp will catapult JTI, which currently has about 3% market share in the Philippines, into the second largest tobacco company (about 23%) in the country.

What this means for the Philippines

With this takeover, just two transnational tobacco companies (PMI and JTI) will now control 94% of the cigarette market share of the Philippines. This elevates these two foreign tobacco companies into a position to use trade arguments such as “investment friendly environment” and “easier regulatory framework” to block and push back regulations on tobacco. The Philippines can borrow some lessons from Malaysia.

For example, they claimed enlarged PHW and plain packaging of tobacco are a violation of the TRIPS (Agreement on Trade-Related Aspects of Intellectual Property Rights).

In March this year (27-29 March), the US-ASEAN Business Council conducted a trade mission to Malaysia where they met with top leadership in the government. PMI is the Vice Chair of the ‘Custom & Trade Facilitation’ division of the US-ABC. Previously, PMI has reported they meet with the Minister of Finance every year via the American Chamber of Commerce to provide input on taxation issues.

Also in March, the Ministry of Health announced they will introduce substantial tax increase on tobacco in 2017 because anti-smoking campaigns have so far failed to discourage smokers. By April, the Second Finance Minister stated, “At the moment, the government has no intention of increasing the cigarette tax.”

With the recent acquisition, JTI has bolstered its position in the ASEAN region. JTI will now have a strong presence in the Philippines which may become its regional hub, since it shut down its factory in Malaysia. JTI is already exporting cigarettes from the Philippines to its ASEAN neighbours. JTI also has significant cigarette market share in Singapore and Malaysia. 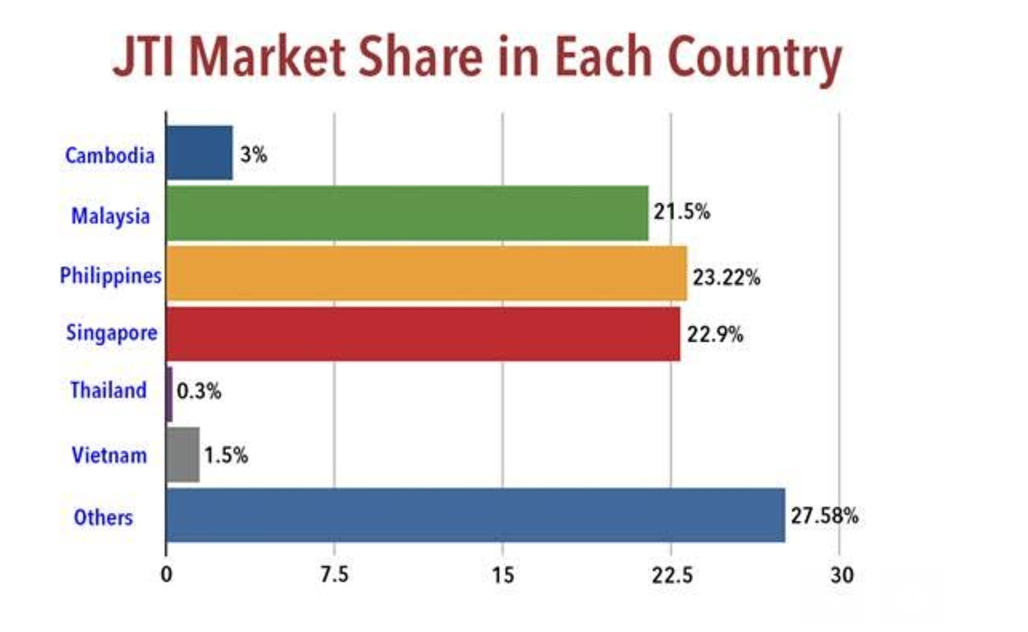 JTI is known to use the Japanese Embassy to open doors to high level government officials and participate in promoting the tobacco business. The Japanese Ambassador to Malawi for example visited the tobacco auction floors in July this year. Last year, theJapanese Ambassador to Ethiopia attended the signing ceremony when JTI acquired 40% of the Ethiopian National Tobacco Enterprise.

In 2014, Parties to the WHO FCTC adopted a decision at COP6 to protect their foreign missions from the influence of the tobacco industry under Article 5.3. Japan, as a Party to the FCTC, must implement Article 5.3 and subsequent decisions of the COP, and not use its embassies overseas to promote the tobacco business.

Bottom line, whether the cigarettes are sold by transnational companies, local companies or state owned enterprise, tobacco still kills. Hence governments must act without compromise to do their utmost to enact the strongest tobacco control measures and protect public health.