Bangkok: Thailand has banned tobacco related CSR activities in their new legislation which comes into force in July 2017. Thailand now joins Lao PDR and Myanmar in such CSR activities being banned and has closed the loophole in achieving a comprehensive ban on tobacco advertising, promotions and sponsorship.

Although Thailand has among the toughest tobacco control legislation, the tobacco industry (TI) has used CSR activities to promote its corporate image to both the public and the government. Previously, Thailand banned only the publicity of tobacco related CSR activities. However this was not effective and did not stop the TI from publicising them in the media and online.

Between 2010 and 2016, Philip Morris International (PMI) for example spent US$200,000 – $460,000 annually on CSR activities in Thailand (Table 1). A well-known local NGO, Population and Community Development Association (PDA), has been receiving the lion’s share of PMI’s grants. Between 2012 and 2016, PDA received multiple grants totalling between $260,000 and $425,000 each year. It is tactical for PMI to collaborate with PDA to elevate itself as this NGO works closely with the Thai government, international organisations and UN agencies.

The Thai Tobacco Monopoly (TTM) also found ways to publicise its CSR activities through its donations to anniversary celebrations of government agencies such as the Metropolitan Waterworks Authority’s 49th anniversary of “MWA sharing smile to community” project, 84thanniversary of the Exercise Department and the Thammarak Foundation on the 142ndanniversary of the Revenue Department.

Vietnam has banned only the publicity of such CSR activities however it is not effective in stopping the TI from publicising as there is a lack of enforcement. 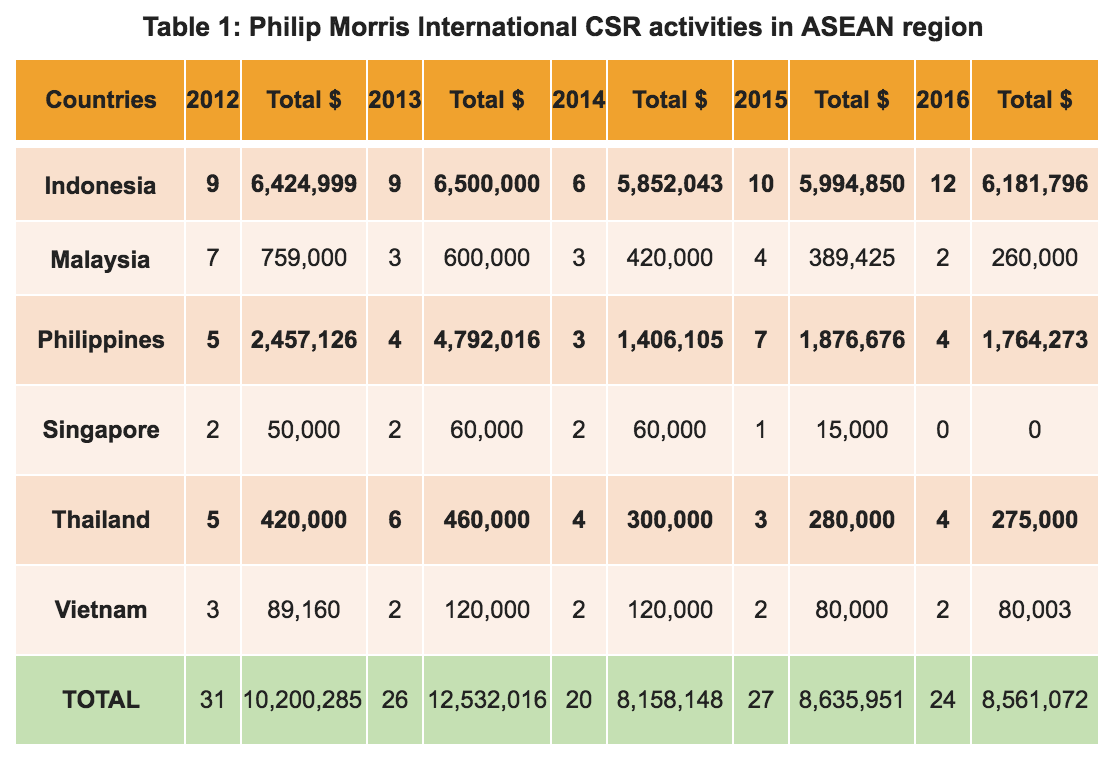 None of the governments in the ASEAN region require the TI to declare their expenditure on CSR activities, promotions, retailer incentives and lobbying. Hence one cannot ascertain the actual amount the companies spend on these activities. FCTC Article 5.3 requires such disclosure.

The real intentions behind the TI spending money on CSR activities is revealed when we see their recipients opposing tobacco control regulations across the region. Farmers groups, retailers associations and coffee shop associations – recipients of CSR scholarships for their children – have opposed TC legislations in Indonesia, Malaysia, Philippines, Thailand and Vietnam. The CSR recipients express the same opposition as the TI – tax increase, ban on pack display at point of sale, retailer licensing and plain packaging of tobacco.

Philip Morris and JTI did not disclose they paid a think tank, IDEAS (Institute for Democracy and Economic Affairs), in Malaysia about $42,000 in 2015 and $7,500 in 2016. IDEAS has been among the main vocal opponents to plain packaging of tobacco and excise tax increase in Malaysia these past two years.

Similarly while PMI claims it contributes about $6 million a year in CSR activities in Indonesia, it does not disclose its expenditure on lobbying activities to mobilise farmers, researchers and parliamentarians to oppose tobacco control legislation. Indonesia continues to have the weakest tobacco control in the region.