Four Indonesians are richer than the poorest 100 million in the country, OXFAM reports. In just one day, the richest Indonesian man can earn from interest on his wealth over one thousand times more than what the poorest Indonesians spend on their basic needs for an entire year. 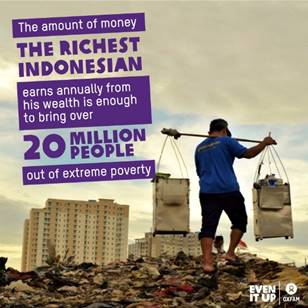 The investment returns on the wealth of just one of the four richest, which include cigarette tycoons Budi Hartono, Michael Hartono and Susilo Wonowidjojo, would eliminate extreme poverty in Indonesia for a year. The bulk of Indonesia’s 65 million smokers are poor. Hence the poor have to keep smoking for the tobacco tycoons to keep making their billions. In addition there are more than 16 million children smoking, set to become life-long smokers.

Policy makers have failed to protect Indonesia’s children and the poor from the tobacco scourge.

Some brave children are taking proactive steps to protect themselves from the clutches of tobacco. Young advocates, calling themselves Pembaharuan Muda (young reformers), have launched a campaign “We reject being targeted”, or “Tolak Jadi Target” in Bahasa Indonesia. This is their clear message to the tobacco industry, policy makers and retailers who promote tobacco.

According to a survey conducted by youths in 15 cities, 85% of schools are surrounded by tobacco advertisements. Last week they released their findings in a report titled, “Invasion of cigarettes is unstoppable” in 17 cities simultaneously. Sadly, this is not the first report that illustrates tobacco advertising target children near schools.

A similar report was released by Lentera Anak two years ago calling on the government to ban tobacco advertising. However their appeal went unheeded. In fact for several years now children have been appealing to policy makers to ban tobacco advertising and sponsorships. Unfortunately the policy makers don’t agree with the children. As for the tobacco companies, they don’t care; they only want the children’s lips and to continue making their billions.

City after city, the young reformers have been approaching shops near schools that advertise tobacco, persuading shopkeepers to remove the advertisements. In fact they have been giving the shop keepers a helping hand. The youth have been providing alternate signage to shopkeepers, which bears the text, “No tobacco advertising to children”.

You can support Indonesia’s youth. The youth have started a petition: “Stop tobacco ads around schools!” [Perusahaan Rokok, Stop Beriklan di Sekitar Sekolah!] You can sign the petition here: http://bit.ly/2miv7HD