Recently, the International Tobacco Growers Association (ITGA) brought a group of tobacco growers from several ASEAN countries to its Asia Tobacco Forum in New Delhi. Why Delhi? Because it is the venue for COP7 in November and the ITGA is firing the first salvo for its routine protest against the FCTC.

While the ITGA called its Forum with a big name, “Asia Forum”, it was actually a small group of tobacco growers from four countries, Philippines, Thailand, Vietnam and Indonesia that ITGA brought to India.

Predictably, the Forum issued a Declaration by tobacco growers, however the contents reflect the ITGA’s sponsors – Big tobacco. It has all the familiar buzz words, misleading statements, lies, statistical gymnastics, omissions and usual accusations we have seen from the industry before. These are exposed below:

To increase its profile and credibility, the Declaration starts by describing the ITGA as the “only non-profit organisation that represents tobacco growers globally” but fails to disclose it is funded by the top four transnational tobacco companies.

The Declaration blames the fall in demand for tobacco leaves on ‘flawed regulatory measures’ like ‘extremely high taxes’ and ‘excessively large pictorial warnings’ on packs. On the ground growers in India, Indonesia and the Philippines have blamed the problems they face squarely on low prices for their leaves, or companies not purchasing their leaves and on unpredictable weather. The growers have to be rescued by government intervention.

Lie No.1: “Regulatory policies are driven by public health community and anti-tobacco activists who have no real knowledge or stake in tobacco cultivation”

Approval of tobacco control regulations usually involves consultation with relevant departments and stakeholders. Often it is the Health Department that has to compromise on best practice. For example the Indonesia Government Regulations 2012 on pictorial warnings is a compromised 40% which accommodated the tobacco industry and took 3 years for approval instead of the usual one year. In the Philippines, the tobacco companies and the farmers’ representative organisation were consulted and agreed to the compromised 50% pictorial warnings placed on the bottom half of the pack, instead of the top half like in other countries, and a lengthened implementation phase.

Lie No.2: “The FCTC has refused the participation of tobacco growers representatives at the COP meetings …” Measures impacting growers have been decided by health experts and not included Departments of Agriculture, Trade and Industry.

In reality government delegations of the Philippines and Vietnam to the COPs have consistently included several representatives from the Departments of Agriculture, Trade and Industry (see Table). In COP6, the Philippines delegation included three officials from the Department of Agriculture one of whom was the Deputy Administrator, National Tobacco Administration, when the report on Article 17 & 18 was adopted. Vietnam even had two representatives from the Vietnam Tobacco Association at COP5. [Refer to COP Participants List for full list of government delegations]

Lie No.3: ITGA claims there are no alternate crops in these countries

Although tobacco growers are moving to alternate cash crops, the ITGA refuses to acknowledge this. In India, to help growers shift away from tobacco, the government is giving high priority tohorticulture crops such as fruits, vegetables, root and tuber crops, coconut and cashew. About 384 districts spread across 23 states and union territories are covered by this programme under the Mission for Integrated Development of Horticulture (MIDH). In the Philippines, alternate crops such as pepper (hot/sweet), tomato, garlic and eggplant provide higher income than tobacco. In Indonesia, onion, melon and red chilli reaped higher yields and profits than tobacco. The Malaysian government has assisted tobacco growers to shift to kenaf. 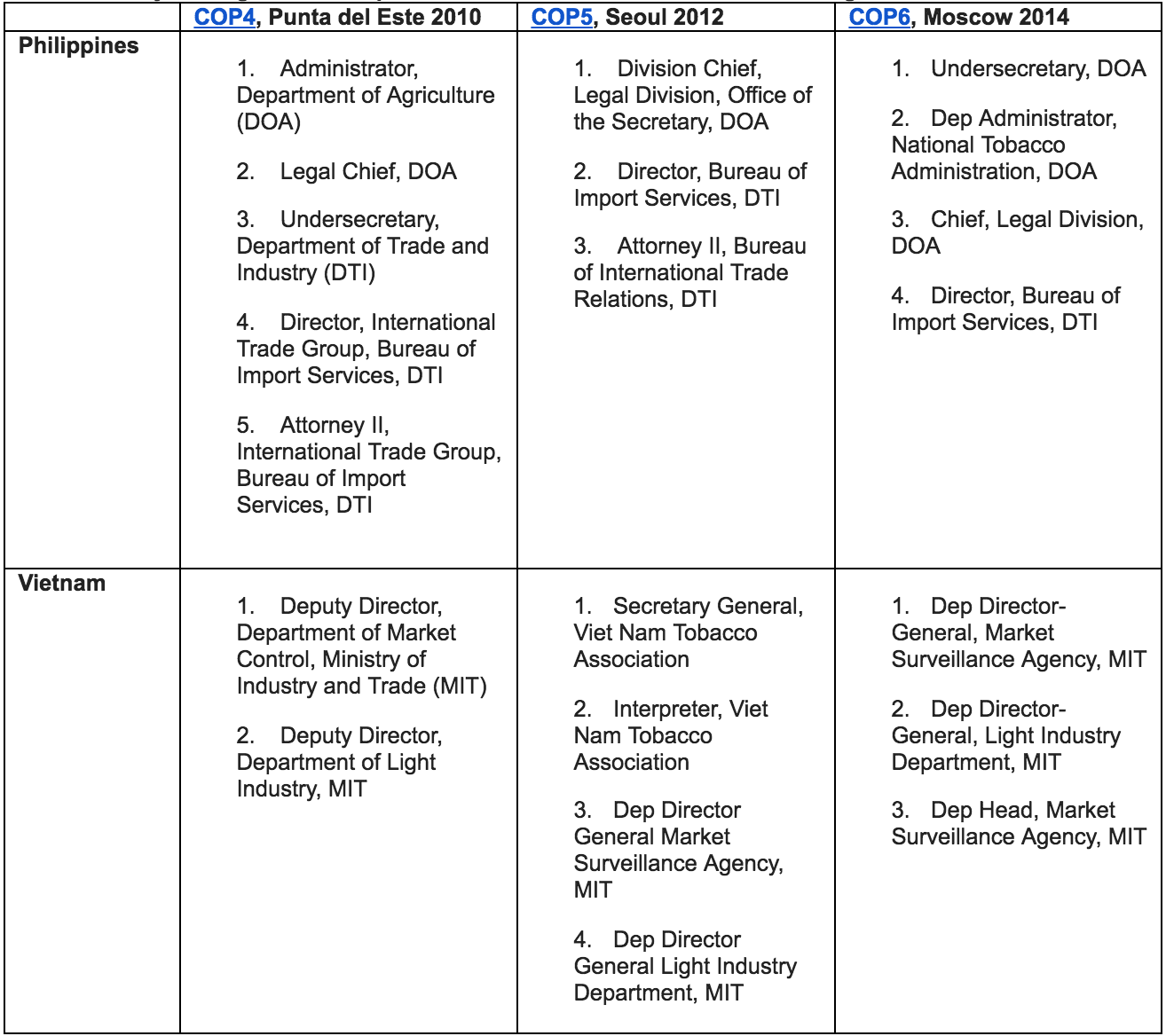 Despite the ITGA’s tactics to inflate the importance of tobacco in the agricultural sector, in the ASEAN region, tobacco is lies low down the list of agricultural commodities. Over the past several decades, despite the industry claims of tobacco being a cash crop, tobacco farmers and their families have not benefited in the industry’s growth and profits and are often exploited through unfair contracts and leaf buying practices that keep them poor.Note: This is incomplete list. Refer to COP Participants List for full list of government delegates

In questioning the need for 85% health warnings on packs, the ITGA claims the average warning size of top 5 tobacco growing countries is only 20%. Huh?? It completely ignores the fact over 70 countries now have prominent pictorial warnings on packs. The FCTC Article 11 Guidelines, adopted by 180 countries, call for warnings that cover more than 50% of the principle area and recommend plain packaging. Thailand has 85% pictorial warnings and their tobacco growers are not out of a job.

The ITGA claims there are 45.7 million people including farmers, farm workers and labourers relying on tobacco in India. However according to the latest ILO report, there are only 89,300 registered tobacco growers in India.

It is the tobacco industry that actually exploits the growers. In the own words of an industryexecutive, “In an industry with a retail value of $800 billion, the tobacco farmer is the most forgotten element in the chain and always on the short end of the stick.”